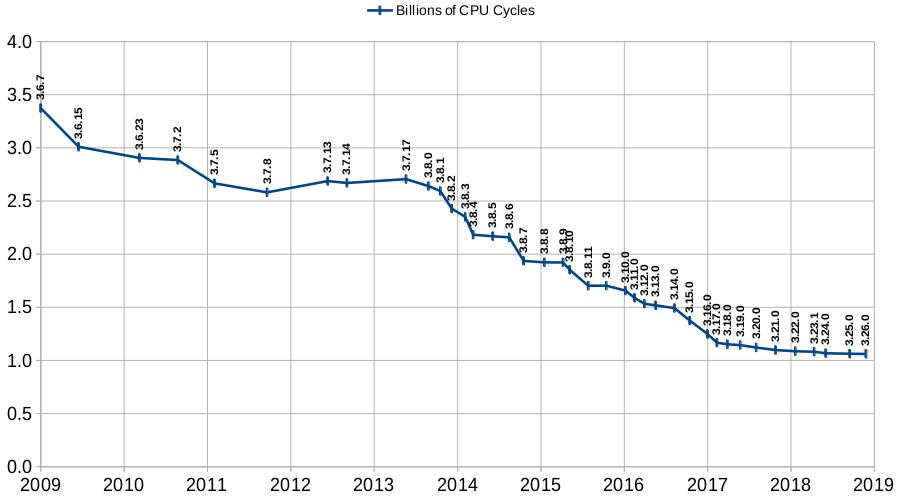 In brief, the CPU performance of SQLite is measured as follows:

For performance measurement, SQLite is compiled in approximately the same way as it would be for use in production systems. The compile-time configuration is "approximate" in the sense that every production use of SQLite is different. Compile-time options used by one system are not necessarily the same as those used by others. The key point is that options that significantly impact the generated machine code are avoided. For example, the -DSQLITE_DEBUG option is omitted because that option inserts thousands of assert() statements in the middle of performance critical sections of the SQLite library. The -pg option (on GCC) is omitted because it causes the compiler to emit extra probabilistic performance measuring code which interferes with actual performance measurements.

For performance measurements, the -Os option is used (optimize for size) rather than -O2 because the -O2 option creates so much code movement that it is difficult to associate specific CPU instructions to C source code lines.

The "typical" workload is generated by the speedtest1.c program in the canonical SQLite source tree. This program strives to exercise the SQLite library in a way that is typical of real-world applications. Of course, every application is different, and so no test program can exactly mirror the behavior of all applications.

The speedtest1.c program is updated from time to time as the SQLite developers' understanding of what constitutes "typical" usage evolves.

The speed-check.sh shell script, also in the canonical source tree, is used to run the speedtest1.c program. To replicate the performance measurements, collect the following files into a single directory:

As SQLite developers edit the SQLite source code, they run the speed-check.sh shell script to track the performance impact of changes. This script compiles the speedtest1.c program, runs it under cachegrind, processes the cachegrind output using the cg_anno.tcl TCL script, then saves the results in a series of text files. Typical output from the speed-check.sh script looks like this:

The important parts of the output (the parts that the developers pay the most attention to) are shown in red. Basically, the developers want to know the size of the compiled SQLite library and how many CPU cycles were needed to run the performance test.

The output from the cg_anno.tcl script shows the number of CPU cycles spent on each line of code. The report is approximately 80,000 lines long. The following is a brief snippet taken from the middle of the report to show what it looks like:

The numbers on the left are the CPU cycle counts for that line of code, of course.

The cg_anno.tcl script removes extraneous details from the default cachegrind annotation output so that before-and-after reports can be compared using a side-by-side diff to view specific details of how a micro-optimization attempt affected performance.

The use of the standardized speedtest1.c workload and cachegrind has enabled significant performance improvement. However, it is important to recognize the limitations of this approach: